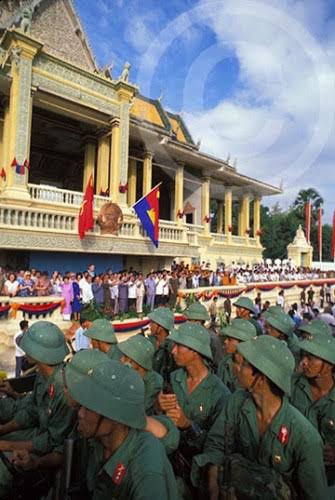 Could the Khmer Rouge have made Cambodia a powerhouse?

This is a story about alternate histories, not a positive position on the Khmer Rouge. Yet what might have happened if this internationally recognized government had remained in power? Could the Khmer Rouge have made Cambodia a powerhouse?

When the Vietnamese invaded the Kampuchean government asked and assumed their sponsor, the Peoples Republic of China would support them. The Chinese suggested negotiations, which the Khmer Rouge flatly ignored, and the rest is history.

But lets say the Khmer Rouge backed down and with the promise of military support from China the Vietnamese agreed to a a peace treaty. The Khmer Rouge stay in power, and the Killing Fields continue.

With news quickly spreading about how bad the killing fields are the Chinese intervene and there is coup whereby Pol Pot is replaced as leader by the relatively liberal and internationally accepted Khieu Samphan. Samphan is seen as a Deng Xiaoping style reformer.

Khieu Samphan admits to the mistakes of the previous regime and allows for the re-population of the cities, the experiment with extreme socialism is over. In 1985 Sihanouk is allowed to return as head of state, being given the ceremonial title of President-for Life.

As the Eastern-Bloc starts to disintegrate there are protests in Phnom Penh that are brutally repressed, the Khmer Rouge still favor a one party state.

Due to ti its early opening of its economy and intense Chinese investment Democratic Kampuchea becomes one of the Asian tiger economies.

The government apologies for the excesses of the former regime, with there being show trials for junior members of the Khmer Rouge, but with the leadership remaining blameless.

Democratic Kampuchea is at a similar economic and development level with China, there are high speed trains and the like, and it is run by the second generation family members of the Khmer Rouge regime. There are museums throughout the country celebrating the victory over America and the achievements of the Communist Party of Kampuchea.

Khieu Samphan is seen as a great leader on par with Deng Xiaoping….

Could the Khmer Rouge have made Cambodia a powerhouse? Of course no one will eer know what could have been.