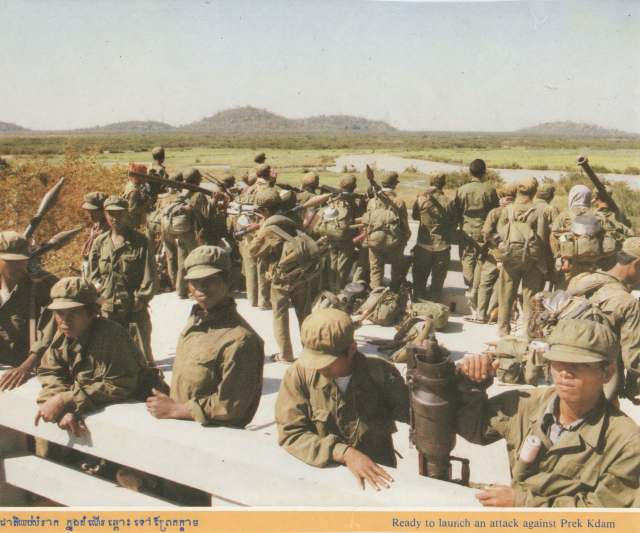 After boycotting the 1993 elections the Khmer Rouge and its armed forces fled to their strongholds of Pailin and Anlong Veng. Here they formed the international unrecognized Provisional Government of National Union and National Salvation of Cambodia.

Officially the NADK was aligned with Royalist and Republican forces, but in actual fact was by far the most superior military force. With its allies admitting that without them there would be no insurgency.

During the 1980’s the backbone of the army changed from the previously battle hardened veterans to new younger recruits. These recruits still came from the lower rural classes and were adept at guerrilla warfare. It is estimated that the Khmer Rouge received up to $100 million a year from various outside sources.

Strength of the National Army of Democratic Kampuchea

At its height in the 1980’s it had a fighting force of up to 50,000 men. Following its refusal to take part in elections the forces dwindled as senior KR leaders defected to the government.

By 1999 and the capture of  he was being protected by a mere handful of loyalists.

The National Army of Democratic Kampuchea and the Cambodian Civil War

In the mid 1990’s and during the brief period of unrest between the CPP and FUNICIPEC, the force soft the Khmer Rouge were courted by both sides in the conflict. This was a huge reason for the defections and freedom of many pf the leaders of the Khmer Rouge for so long.

Integration of the National Army of Democratic Kampuchea

Following the various defections from the Khmer Rouge, the former NADK troops literally just changed uniforms and continued as soldiers. This was done as part of the  of Hun Sen, in order to end the civil war by reintegrating the Khmer Rouge into society.